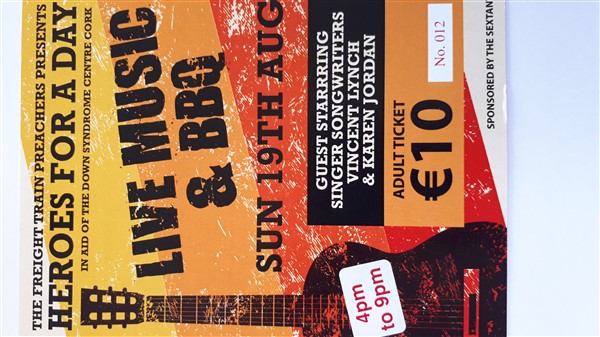 Privileged to share the stage with Karen Jordan, her of the magical singing voice, had  the place enraptured with some beautiful songs. Performing from such a wide ranging platform from Paulo Nutini, Mary Black, and Stevie Nicks. She finished her set with the introduction of her daughter Luciana who at only ten years old has one heck of a musical career before her. No worries facing into a packed Sextant, while  effortlessly performing some of the latest hits on her Ukulele . They were followed by one of the city’s  more accomplished  singer songwriters Vincent Lynch , currently signed to universal records and first choice opening act  of many well known mainstream  bands and artists, including John Spillane and Bagattelle.  A stand out solo performance, some would say his best, had most of the other musicians present respect and he set a blistering pace of mostly his own material, his Dadgad tuned Taylor wailing beautifully across the river, all delighting the punters.

We opened the show ourselves  with two of our own songs, “Going Down South” which we released on Reverbnation and our latest number “Whores and Cocaine”. Blasting out the fenders, playing the classic blues of Muddy Waters, BB King and Stevie Ray Vaughan on a sunny lazy Sunday  afternoon in the Sextant beer garden surrounded by music lovers of all genres , to a very generous home Cork audience while supporting a fantastic cause, well lads,  gigs and fabulous Sunday afternoons don’t come better than this. We all were indeed Heros For A Day.

For us as a newly reformed band it was a privilege to share the stage with with these guys. Roll on next year .