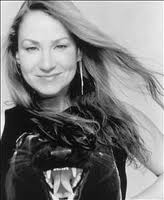 The Freight Train Preachers appreciate our few female fans who have trusted our retro take on the blues, hence alerting you guys to where we take a lot of inspiration.

You have most definitely heard the song “What if God was one of us”, because it was a massive hit for Joan Osborne in around 1996. Apart from that hooky chorus, you identify with those lyrics because it painted a picture of God, that one supreme Deity riding a bus to work, like any of the rest of us.

On digging deeper you will discover what we feel is an under-rated female blues singer. Her recent album, “Bring It On Home” was voted “Best Blues Album” by the Recording Academy and also nominated for a 2013 Grammy Award.

“One of Us” while a huge hit, perhaps did not do her overall reputation any favours. You are devoid of any human emotion if you, like us, are not bowled over by Joan’s torrent of raw emotion that she injects into her work. It’s soulful, sexy, sultry and most of all bluesy. That album by the way, for all you sound freaks, was an analogue recording, just proving she really wants that true bare sound, which only the blues can exploit. None of your fancy Pro-Tools and multiple choices of buttons, no, just a good tight band and top notch singer.eeper you will discover what we feel is an under-rated female blues singer. Her recent album, “Bring It On Home” was voted “Best Blues Album” by the Recording Academy and also nominated for a 2013 Grammy Award.

We conclude that far too much focus went into the pop song “One of Us” and obscured a serious female blues artist. We are delighted she has gone back to her roots and recognition on another stage looms. Just like veteran producer Rick Rubin steered Johnny Cash toward that minimalist sound in the latter part of his career, Jack Petruzzelli has done the same for Joan Osborne. She has put her own unique stamp on her covers of other artist’s material.

As two blokes, we can’t reproduce that awesome range, but for us, it’s chasing down a certain musical taste and appreciation. Her album by the way, would be the ideal romantic surprise for that special person in your life. Check out her website www.joanosborne.com

Be well my friends

Frankie of the Freight Train Preachers